The Medical Device Single Audit Program (MDSAP) is a program that allows the completion of a single medical device QMS regulatory audit that satisfies the requirements of multiple countries simultaneously.

The MDSAP is a way for medical device manufacturers to be audited once to unlock access to five different international markets: Australia, Brazil, Canada, Japan and the United States.

Preparing for an MDSAP audit? Or just want some inspiration for an internal nonconformity grading system of your own, that aligns with industry practice?

Here's how it works.

Let’s explore how each step works.

The matrix divides the clauses of ISO 13485:2016 into two distinct categories:

1) Those that indirectly impact your QMS as 'administrative enablers'

2) Those that directly impact it with a direct influence on your design and manufacturing controls which, in turn, directly impacts your product's safety and performance

The matrix then adds an 'occurrence' factor designating if that nonconformity has been observed in either of your two previous QMS audits.

The logic is clear: a recurring nonconformity directly impacting your QMS is a far more serious finding than a one-off indirect nonconformity, and so receives a higher grade. 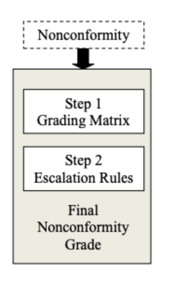 Your initial matrix grade is then augmented as follows if additional risk factors are identified.

+1: Absence of a documented process or procedure

+1: Release of a nonconforming device

The most serious type of nonconformity finding in an MDSAP audit would therefore be a recurring nonconformity (+2), directly impacting your QMS (+2), unsupported by any documented process or procedure (+1), and which has caused the release of a nonconforming device to market (+1).

Although the maximum theoretical score is 6, scores of 5 and 6 are treated as equally serious and so the score is capped at 5.

In this particular case, a high grade is not something to be proud of!

Do you feel prepared for your upcoming medical device audit?

Download our audit readiness checklist for medical device companies to get shipshape and confident.

Sumatha has 19 years of QA/RA experience across the medical device and pharmaceutical sectors.

She has built quality management systems for compliance with the FDA QSR, Canada’s Medical Devices Regulations, NIOSH, MDSAP, COFEPRIS, and the EU's MDR, IVDD and IVDR.

She holds a Master’s in Chemistry and an advanced certificate in quality assurance management, along with auditor certifications for ISO 13485, ISO 17025, ISO 9001 and IATF 16949.

How to Pass Every Quality Management Audit Without Breaking a Sweat

What the FDA's new MDDS guidance means for you

Access our guide full of
top tips and best practice for before, during and after
the big day